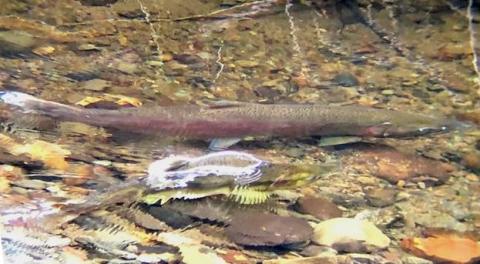 The start of the 2021-22 spawner season has been wild and unprecedented in many ways. October’s atmospheric river dropped nearly 18 inches of rain and raised flows in Lagunitas Creek to 3,700 cubic feet per second – both records for October. The storm washed away two years of algae growth and left behind clean, loose gravel to welcome the returning salmon and their eggs. Chinook Salmon immediately started showing up all over Marin County, including in San Geronimo, Fairfax, Mill Valley, and Redwood Creek. Many, if not all, of these fish, were the survivors of the millions of juvenile Chinook Salmon that were bred in hatcheries and released into San Francisco Bay in recent years. These fish don’t have a natal stream to return to, so they will follow the scent of rainwater to the nearest stream.

More salmon arrived in Lagunitas Creek following the second large storm of the season on November 9. This week we counted 60 Coho Salmon – the most we’ve seen in mid-November in 20 years. Almost all of these fish are schooling in a few locations in Lagunitas Creek, and are likely waiting for another storm before continuing their migrations and spawning. In addition to Coho, we observed three other species of salmon in a single day: Chinook, Chum and Pink Salmon. Very few things are as exciting to a fisheries biologist as an unprecedented diversity of fish. The cherry on top was watching a very confused male Pink Salmon attempting to spawn with a female Coho (photo seen above) . The female appeared to have spawned already, and in any case, these species can’t interbreed.

Little rain is forecast for the rest of November, so we (and the fish) may have to wait until December for spawning to get going in earnest.

Image: Female Coho and smaller male Pink Salmon (note the hump extending out of the water).

Photo by Annabelle Howe and Jaclyn Sherman, Marin Water
Back to news listing