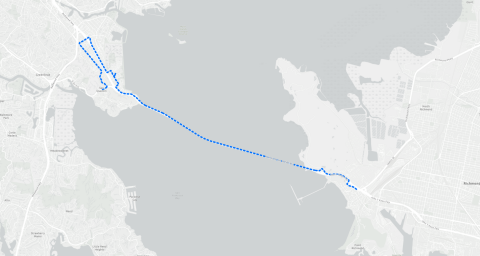 In light of the sudden and substantial increase in its reservoir storage, Marin Water will now develop the potential Emergency Intertie Project using a traditional environmental review process rather than rely on the California Environmental Quality Act (CEQA) emergency exemption for the project. October through December rainfall dramatically improved the district’s reservoir levels and altered the urgency of its water supply needs leading the Marin Water Board of Directors on Tuesday to approve moving forward with the shift in the project review process which will extend the overall timeline for planning for the proposed project.

The Intertie project is meant to augment the district’s water supply through construction of an eight-mile pipeline across the Richmond-San Rafael Bridge that would carry water purchased from third parties to Marin. The district originally began pursuit of the project under a CEQA emergency exemption in October 2021 when, at the time, it faced an imminent threat of running out of water in 2022 due to historically low water supply levels. Following immense rainfall in the following months, Marin Water’s reservoirs have now filled to 92 percent of total storage capacity – well above the 75 percent average for the same time of year.

“Circumstances have changed considerably, and we no longer face the dire conditions that existed when we initiated the Intertie project under CEQA’s emergency provision,” said Board Director Cynthia Koehler. “At the same time, it is prudent to build on efforts to date and continue to pursue this project as a longer-term climate resiliency measure, so our community has a diverse water supply portfolio to address future droughts.”

Marin Water’s pursuit of the Intertie Project will now transition to a full environmental review process that will take a year or longer to complete. The extended timeline provides an opportunity for the district to not only undertake a thorough environmental analysis, but also allows more time to conduct a thoughtful review of the project’s design and construction plans and expand engagement with project stakeholders.

“Recent rains have provided a bit of drought relief for now, but it is essential to take advantage of our forward momentum in developing drought resilience options that make the most sense for our community and the region,” said  Koehler.

For more information about the Intertie Project, visit marinwater.org/EIP.

Back to news listing